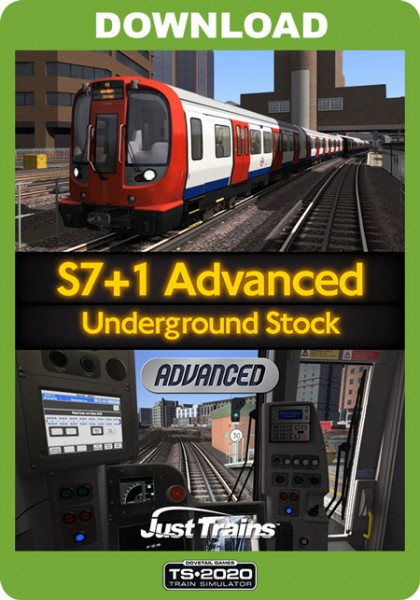 S7+1 London Underground stock has been in service since 2010 and is only used on the Metropolitan line. The S stock ('S' stands for 'Sub-surface’) has less seating than previous trains but is capable of faster acceleration and has more room for standing passengers.

The S7+1 will operate on any third- or fourth-rail route but Just Trains' Metropolitan Line has been specifically developed for the S7+1 and S8 Advanced and the Just Trains London-Aylesbury route includes the section of the Metropolitan line which runs beside the main line route. These routes include custom London Underground signalling and various invisible markers which allow the functioning of S7+1 features such as the tripcock safety device, door opening interlock and the simulated in-cab video screens which display at stations. Certain advanced features of the S7+1 will not function on routes that are not specifically designed for it.

Operating passenger emergency alarm:
When activated, the PEA alarm shows, the train brakes are automatically applied and the PEA screen displays on the TCMS along with an indication of which carriage has the alarm.

Accurate stopping:
Accurate stopping, using the stopping chevrons on the platform, is required to allow the doors and simulated in-cab video screens to operate. Correct Side Door Enabled (CSDE) icon will show in the cab when the train is stopped correctly.

Operating outside door indicator (ODIL):
These will illuminate orange when the passenger doors are open. The ODIL on the de-icing car will show blue when de-icing is in operation.

De-icing units:
When the appropriate consist is used (not all have de-icing units) it will have a de-icing car in it and you will be able to operate the de-icing function from the TCMS.

Munich-Augsburg
€19.99 *
Welcome to aerosoft.com!
We use cookies. Some of them are technically necessary (for example for the shopping cart), others help us improve our website and to offer you a better user experience.